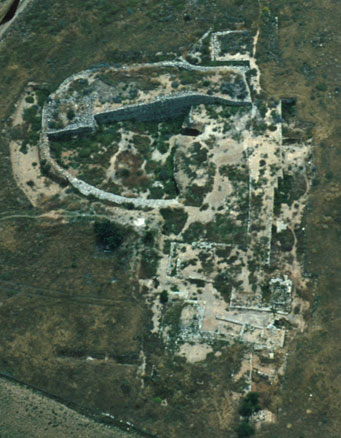 The excavation (Fig. 1 - Fig. 2) of the Northeast Gate, a stronghold of the defences of Palaipaphos, revealed the development of the city’s fortifications (Fig. 3 - Fig. 5) from the early Archaic to the early Hellenistic period. At the same site, extensive remains of elaborate siege and countersiege operations were discovered, conducted by a Persian army in 498 BC. The site represents the rare example of an archaeological find context dated to the year: at Palaipaphos a specific historical event barely recorded in a text (Herodotus V 115 refers obliquely to it in one brief sentence: "the Cypriot cities except for Salamis were being besieged...") could be recovered from the earth with remarkable precision (Fig. 6), yielding - together with Masada and Doura-Europos - the most detailed archaeological information on ancient siege warfare, including one of the few helmets (Fig. 7) found on the actual battle field. As the Persian troops used all available materials for the construction of the siege ramp, the ramp yielded an exceptional find group: more than 1000 fragments of votive monuments from a temenos outside the walls, comprising some of the finest Archaic sculpture found in the island. This find group is of importance for Cypriot archaeology and history in three respects: the development of the Syllabic script, the chronology of Archaic sculpture (Fig. 8 - Fig. 9), and the blending of indigenous and foreign traits in the island's culture.